The Extreme Dangers Of Arc Flashes 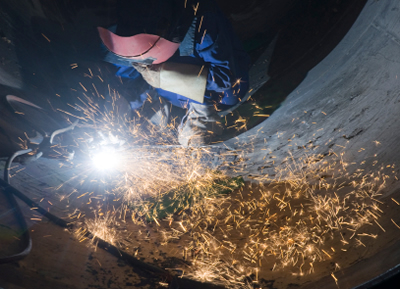 Sharks are among the most aggressive ocean predators at sea. The great white shark ranks number one as the most dangerous sea creature, and the species as a whole ranks number eight as the most dangerous animal. Nonetheless according to Fire Engineering Magazine, injuries from arc flashes, a type of electrical explosion resulting from an alternating current, occur more than 1,000 times as often as shark attacks do! With 10 accidents occurring each week, two of which are usually fatal, arc flash occurrences are nothing to scoff at. The injuries and damages from arc flashes are endless including hearing loss, eyesight loss, memory loss, lung collapse, and burns-even from just from the light and heat admitted from electric currents. While signs do not exclusively prevent arc flashes from occurring, Arc Flash Warning Signs alert workers of the dangers involved and inform them of the necessary safety precautions.
Now that you know the dangers of arc flashes, it would be beneficial to understand how arc flashes are instigated so that you can be wary of the hazards. A type of electrical explosion, arc flashes are a result of low impedance or opposition to alternating current. When a short circuit, a type of electrical malfunction, through the air occurs, at faster than 1/1000 of a second, it transforms into electrically conductive metal plasma that produces intense amounts of light energy. In simpler terms, the short circuit produces radiant heat which can then catch onto surfaces causing fires, or onto skin causing burns, the most popular injury caused by arc flashes. In Washington State, Total Worker’s Compensation amounted to over $1.3 million for hospitalization costs due to serious injuries, specifically burns, resulting from arc flashes and explosions for the years 2000-2005. Another company in New York was fined over $88,000 after a failed inspection resulted in 14 serious injuries.

The Safety and Health Assessment and Research for Prevention warns of the potential dangers from arc flashes in unsafe environments. A worker in Washington sustained burns to over 20% of his body after his shirt caught on fire from the force of an arc blast. Another man, with over 20 years of experience as an electrician, de-energized the wrong circuit, causing an arc flash that burned his arm, neck and face. A third worker endured electric shocks to his leg and accompanying flash burns to his body while holding an energized wire that grounded through his leg. Unfortunately some employers don’t appreciate the gravity and potential dangers of arc flashes enough to implement necessary safety procedures. In order to prevent accidents such as those detailed above, install Arc Flash Danger Signs which list safety precautions for work places involved with electricity. The Safety and Health Assessment and Research for Prevention has gone so far to report that “No worker has ever been injured or killed by an arc flash while working in an Electricity Safe Working Condition.”

Over 80% of injuries in an electrically pervasive environment are the handiworks of arc flashes. People working with energized equipment are constantly at risk of electric shock and explosions. Nonetheless, a few conditions such as dropped tools or other gear with sparks, gaps in insulating materials, and inadequately installed or maintained equipment increase the chances of potential risks. Self-laminating enhanced Arc Flash Warning Labels that allow you to customize the electricity and voltage details of your work lab can help keep the risks to a minimum. The NFPA 70E-2000, Standard for Electrical Safety Requirements for Employee Workplaces, advises companies to follow the federal compliance actions for safe work practices. The OSHA, Occupational Safety and Health Administration, which enforces safety standards and cites to the NFPA safety requirements, endorses warning labels, proper tools, training for workers, personal protective equipment (PPE), and calculations of the degree of arc flash hazard. Arc Flash Labels in both durable economy vinyl and economy paper which detail the NFPA requirements and endorse PPE facilitate establishing a cautious work environment.
The burns and injuries afflicted on workers are not only serious, but also cause an extreme amount of pain. For comparison’s sake, imagine the exposure of a cigarette lighter on the tip of a finger. The energy of that exposure expressed in calories per centimeter squared is 1 cal/cm^2; a second degree burn is caused by an energy exposure of just 2 cal/cm^2. A typical arc flash event can generate up to 40 cal/cm^2. Furthermore, while 2nd degree burns are a cause of exposure to 174 degrees Fahrenheit for 0.1 seconds and 3rd degree burns to 206 degrees Fahrenheit, the temperature of an electric arc flash reaches up to 35,000 degrees Fahrenheit, roughly four times the temperature of the Sun’s surface! Although the aforementioned are extreme temperatures and forces of energy, these are typical measurements of the heat and electricity that pervade a standard electrically and heat induced work environment.
As one of the most “dangerous hazards facing electrical workers...which does not [even] require contact with a live conductor,” arc flashes cause severe injuries that may lead to fatality. By posting and installing Safety Labels, you can enforce precautionary rules and habits.
© 2021, MySafetySign.com