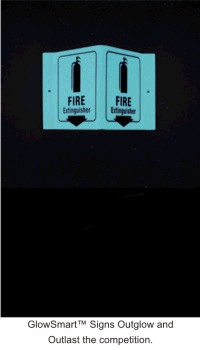 Learn about the standards for photoluminescent signs and how our GlowSmart™ signs exceed these specifications.

• GlowSmartâ ¢ photoluminescent do not require electricity. Increasingly, they are replacing electrical or battery-driven signs. You avoid the hassles of battery or bulb replacement and the expense of wiring. Also, after the end of a blackout, you can quickly return to building (and not wait for a battery pack to laboriously recharge).

• Spot signs in a black-out. Great for emergency procedures. Sign absorbs light by day and glows at night.

• Before August, 2007, the activation procedure was much more lenient. Prior to measuring the sign's luminance in the dark, the old standard (circa 2002) allowed signs to be blasted with intense Xenon lighting. This allowed inferior signs to pass. In August 2007, the test procedure was significantly improved. Fluorescent lighting became the norm (and understandably much more realistic). In the workplace, Xenon is rare. Fluorescent lighting is ubiquitous. The implications for signs are also important. Signs need to have more photoluminescent punch. Our GlowSmartâ ¢ signs are loaded with Strontium Aluminate.

• GlowSmartâ ¢ signs use photoluminescent materials that meet or exceed current standards and codes.