History of the Skull & Crossbones and Poison Symbol

The Skull and Crossbones symbol, as popular as it is, is also one of the most ambiguous of all symbols when it comes to its history. The symbols most commonly associated with the Jolly Roger, a flag emblazoned with a skull and crossbones that pirates would use to identify their ships.
The symbol's origin, however, is an unsolved mystery that leads historians back two thousand years.

The symbolism of the skull and crossbones has its traces in the ancient era. It was first seen on on the tomb of Tutankhamun in Ancient Egypt, with the cross-diagonal layout of judgement and pity formed the basis of an evolving.
A staff or scepter was the symbol of universal power. The Flail (on the left side of the image above) was used to beat animals and even people to show authority while the crook (right side of the image) was used by a shepherd to pull stray animals by the neck without causing them any harm. 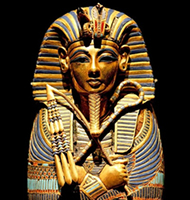 The idol of King Tutankhamun holding a staff and flail in a cross diagonal layout.

1. The Knights Templar
It is widely believed that the skull and crossbones was first used by the Knights Templar in the Middle Ages.The Templars or Knights Templar, occasionally documented as the Order of the Temple, The Poor Fellow-Soldiers of Christ and the Temple of Solomon was the largest charity for nearly two centuries, especially after it was officially endorsed by the Catholic Church in 1129. Its pacifist members became known for many good deeds, and also for the supposed introduction of the Skull and Crossbones.
According to Masonic legend, the skull and crossbones are the bones of Jackes de Molay. In an effort to seize the riches of the Templars, the Church ordered that the society be disbanded. deMolay, the 23rd and last Grand Master of the Knights,was burned alive by the Church. When three Templars came looking for his bones, they found only his skull and femurs. By this time the Templars had become accomplished mariners, and the skull and femurs of the last Grand Master became their nautical symbol â the Jolly Roger.
The legend of the Skull of Sidon also contains some clues to the Jolly Rogerâs relationship with the Knights Templar. The Lord of Sidon, himself a Templar, lost his love when she was young.On the night of her burial,the Templar snuck to back to her grave and dug up her body. At the same time, he heard a voice instructing him to return after nine months to find a son. Nine months later, the Templar dug up her grave to find a head resting on the skeletonâs femurs. The same voice told him to guard the head, because it would bless all of his endeavors, and defeat any enemies before it. The symbol of the son, or the skull and crossbones, became the protecting genius for the Templar.
What should be noted here is that the port of Sidon had always nested pirates. Therefore, the skull and the crossbones could have been used as a symbol for the pirate flag before the time of the Knights Templar.
2. Funerary Symbol:
Adherents of Christianitymaintained one of the earliest uses for the symbol. Toward the end of the Roman Empire and into the Middle Ages, Christians frequently used the Skill and Crossbones to symbolize death, or more specifically, passing from life. The symbol has been discovered in various Christian catacombs around Italy, some of which date back as far as the second century.
During the same early period, the skull and crossbones was also considered to represent 'memento mori', a Latin term used in Rome that can mean, 'Remember death'. 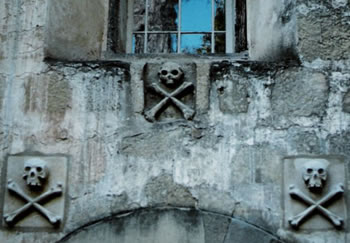 Skull and Crossbones used as a funerary symbol in Spanish cemeteries.
Entrances to Spanish cemeteries were marked with an actual skull and set of femur bones. Continuing throughout the Middle Ages, many people, Christian or not, began to have the symbol carved into their tombstones. Presenting in different manifestations across funerary traditions, the skull and crossbones is nevertheless a universal message that every human dies.
3. Piracy:
During the Later Middle Ages (into the 1400s), the use of the skull and crossbones began to diminish until it was almost non-existent. The symbol was essentially unused during the following century, until it was adopted by some of the most feared people in the world â pirates. Originally, pirates used simply a red flag on the top of their shipsâ mast. The red symbolized bloodshed, and the fact that the pirates gave no quarter (show no mercy). However, many pirates soon changed their flags from red to black, and began to weave the skull and crossbones into them. The Jolly Roger, as the flag came to be called, symbolized death to its purveyors in its color and in its symbol. Writes Miranda Bruce-Mitford, in her book, The Illustrated Book of Signs & Symbols, "The skull-and-crossbones emblem [was] adopted by pirates as a sinister warning of their evil intentions. The emblem filled sailors with dread and signaled death to all who saw it."
The symbol's prominence traveled with piracyâs prominence in travel, coming to an end in the mid-1700s.
Some of the famous pirate flags used from 1693 to 1724 are shown below:

Captain Bartholomew Robertsâ Jolly Roger showing him and a skeleton holding an hourglass.

Adoption by Societies:
The skull and crossbones did not appear as a major recognized symbol again for nearly two centuries, until students at the prestigious Yale University formed a secret society called âSkull and Bones.â The Society has been a part of the university since 1832, and remains one of its most exclusive. This society embraced (and continues to use) the skull and crossbones symbol not to represent death but to represent the mystery surrounding the society.

The prestigious, secret society named as the 'Skull and Bones Society' was formed by the students at the Yale University.
Adoption by Sports Teams:
The skull and crossbones was first adopted by a sports team in 1870. Already popular among many football teams and fans in Great Britain, the skull and crossbones was officially adopted by The Rugby Unions in 1870. In 1876, it was added for a brief period to the Cardiff Rugby Football Clubâs uniforms. It was later removed due to pressure from playersâ parents.
Use in Chemical Industries:
Soon after the Skull and Bones society was created, the symbol took on another use as well. In 1829, New York State Law was changed to require that all containers of poisonous substances be labeled. The skull and crossbones first illustrated those labels in 1850.
The skull and crossbones is now used less and less to label poisonous materials. Its negative, anti-environmental connotations discourage manufacturers from using the symbol, though it still appears in warnings for children, because of its playful associations with pirates. 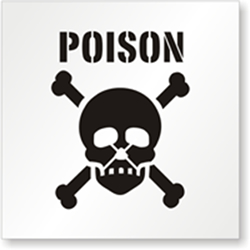 The skull and crossbones is now used to indicate poison.

The skull and crossbones is now used to indicate poison:

The Occupational Safety and Health Administration (OSHA) uses the skull and crossbones in various "Danger" signs to mark acutely toxic materials as hazardous to life. A study conducted at the University of Alberta in Edmonton Canada in 1986 determined the most effectivevariant of the skull and crossbones symbol in an effort to truly universalize one form of the graphic. A white skull and crossbones within a black triangle was ranked most effective at communicating danger quickly and effectively. While this graphic language is not employed universally, the study helped to demonstrate the importance of widespread symbolic cognizance.
Warfare:
The skull and crossbones which adorns the pirate flag, more popularly known as the Jolly Roger, also saw its use in naval warfare. The symbol served to identify the unit. Occasionally, the Jolly Roger became a victory flag, flown to celebrate the toughness which wins a victory, and which victors and pirates share.
The Skull and Crossbones Across Different Cultures:

The Skull and Crossbones symbol has not always proved effective.
Skull and Crossbones have become an icon of the sign and labeling industry throughout the globe. While some evidence shows that this symbol and its connotations are not always effective, the fearsome skull and crossbones generally keeps people away from hazardous substances and reduces the risk of poisoning or infection. With its rich and multifaceted history, the skull and crossbones symbol has become a global safety icon. Its universalization has led to its widespread success, warning against the hazards of poisonous materials throughout history and for generations to come.
Buy Poison Warning Signs and Labels
© 2021, MySafetySign.com