Why Warn? Why are Safety Signs Important??

A seven-year-old boy managed to escape the watch of his parents and wander off by himself. He came across an unmanned substation and snuck inside. There were no signs on the chainlink fence where he entered. As he began to explore the equipment inside, he made contact with a high voltage switch gear and died.

A construction worker who did not speak English well was beginning his first day on a site. He was not notified by his fellow workers that it was required to wear a hardhat at all times, and there were no signs present that he saw or understood. As he began to work without a helmet, a nail gun accidentally fired. The erroneous nail pierced the manâs head, penetrated through his skull and caused severe brain damage.

A metal box on the grounds of a housing project was vandalized. The next day, an elderly women saw that the metal box was open, but did not really know who to call and how dangerous the metal box might be. The warning label on this box, which in reality was a pad-mounted transformer, gave no telephone number. During the time it took to find out who it belonged to, a small girl ventured too close. She was badly burned and loses both arms.

A ten-year-old boy, left alone in his back yard, took apart his family's volleyball net. The boy attached the two volleyball stakes together and reached up to the overhead lines. Both arms and legs were blown off, yet he miraculously survived.

A night shift maintenance worker, asked to do routine maintenance on a plant's small generator, ventured too close to an electric busing. An arc flashed over to a metal screwdriver he was carrying. The worker was badly burned and became permanently disabled. There was no sign or symbol warning against the specific use of such a tool and the warning labels were not visible.

A radio station announced that there was good fishing near a dam in the nearby river. The action of the water over the dam has turned over the layers of water behind, bringing many fish to the surface. A group of fishermen in a small aluminum boat confirmed that the broadcast was right, that the fish, indeed, were biting. They were unaware, however, of the effects of a sudden surge of water over the dam. Danger signs were not entirely visible from their seats. A surge came and their boat was capsized. Even with life vests, those fishermen were trapped underneath their boats and all drowned. 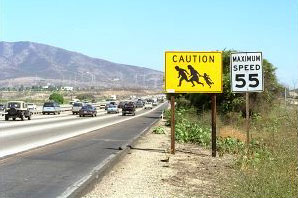 This yellow sign used to be used to warn oncoming cars to be careful of immigrants crossing the highway. However, those immigrants believed that the sign meant that it was actually better to cross the highway at that point. As one may imagine, the consequences were grave. These signs now include the word, "Prohibido", or in English, "Prohibited".
Safety signs, tags and warning labels are an essential feature to any property, and comprise one of its largest and most important assets for many factories. It is strange, especially considering their bold red lettering and vivid graphics, that they go so easily overlooked when it comes to managing company investments. In a typical mid-sized manufacturing plant, for example, the investments in signs (including installation and engineering) can be over $2,000,000. Safety and plant managers should expect the same level of quality of their safety signs as they do of all other equipment. While plants improve and modernize, they continue to buy the same, uninspired sign designs, many of which date back to the 1940s. With so much money invested, and so much at stake, why donât they demand excellence?

âSign are signs,â some might say. It is irresponsible to take such a careless approach to such a major investment.

Moreover, it is simply not true. Safety Signs can and should be improved. For workers or visitors in a dangerous environment, signs are not just signs; they are their first line of defense against unsafe conditions.